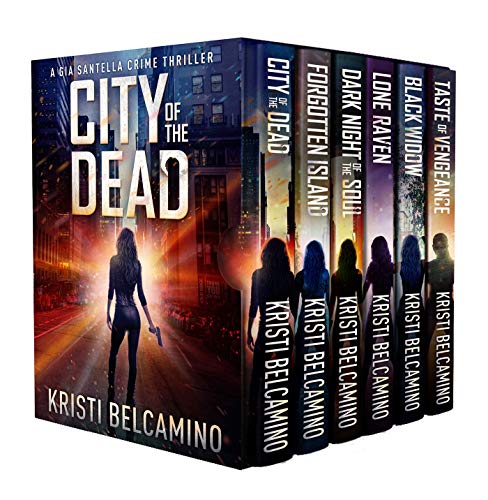 CITY OF THE DEAD (BOOK #1)
Gia Santella copes with her parents’ death by drinking, spending, and kicking ass when it’s necessary. After an unexpected letter reveals that her loved ones’ tragedy was murder, Gia changes her focus to revenge.

Vowing to find the one responsible, the grieving daughter must stay one step ahead of a ruthless plot to end her family line. To avoid yet another family death, Gia has a bloody choice to make: kill or be killed.

When a hate group infiltrates Gia’s San Francisco neighborhood, a student journalist at U.C. Berkeley reporting on the group disappears. Gia’s search for the missing student unravels dark secrets that threaten to destroy her beloved neighborhood. She is caught in a race against time. If she fails, more innocent people will die.

DARK NIGHT OF THE SOUL (BOOK #3)
Under the sultry Mediterranean skies, Gia thinks that she’s finally escaped the dark cloud that has hovered over her most of her life. But she is wrong. When tragedy strikes and she is left reeling, she is thirsty for vengeance. But in her efforts to see revenge and justice, she finds herself face-to-face with a tangled web of deep dark secrets that threaten to destroy everything she ever believed was true.

LONE RAVEN (BOOK #4)
Gia Santella’s hunt for her best friend leads her on a road trip to Mexico where she learns that there is no refuge from evil despite sunny skies and bucolic beaches. The beauty of Baja hides dark secrets and soon Gia finds herself caught up in a group of ex-pats who like the advantages of living in a place where people can disappear without a trace and nobody bats an eye.

BLACK WIDOW (BOOK #5)
A Mediterranean cruise. A fascinating new friend. An assassin playing a deadly game of revenge.
Vigilante heiress Gia Santella has everything that money can buy. It’s what she can’t buy—love, companionship, friendship—that eludes her. When Gia is forced to take a luxury cruise, she sets aside her vigilante ways. As she enjoys exotic lands and foods, a new friendship gives her hope that she might be able to lead a normal life like everybody else. But like everything else in her life has done, her new friendship soon takes a deadly turn.

TASTE OF VENGEANCE (BOOK #6)
They dine with bishops. They vacation with presidents. They sleep with movie stars. So who can stop them when their actions turn deadly? Sydney Rye and Gia Santella—two fierce vigilantes devoted to justice—meet for the first time when they find themselves caught up in a deadly Silicon Valley subculture revolving around some of the most powerful men in the world. It doesn’t take long for them to realize that the elite group of men are playing a depraved and deadly game and nobody will dare to interfere. It’s left up to the two women to risk it all to stop the men and save more innocent lives.

Better, Not Bitter: Living on Purpose in the Pursuit of Racial Justice

Maid: Hard Work, Low Pay, and a Mother’s Will to Survive

Crazy Faith: It’s Only Crazy Until It Happens

On Tyranny Graphic Edition: Twenty Lessons from the Twentieth Century

It’s Better to Be Feared: The New England Patriots Dynasty and the Pursuit of Greatness

Daughter of the Morning Star: A Longmire Mystery

Yours Cruelly, Elvira: Memoirs of the Mistress of the Dark